If you want to read a new series with great thrills, I recommend the Septimus Heap Series by Angie Sage. In the seven books in the series, you will go on quests you have never dreamed of with charms, spells, magyk, and wizards. I recommend this to anyone who likes fantasy, Harry Potter, and other books along those lines.

“Magyk,” book one in the Septimus Heap Series, is a great book for any young reader. If you like the Harry Potter series, you will love the Septimus Heap Series. This book takes you on an adventurous journey from the castle, into the woods, and over great marshes. I recommend this for any reader, young or old. It is such a great page-turning book; you will encounter things you never thought you would. Magyk has been the best series starter I have ever read.

“Flyte,”  book two in the Septimus Heap Series, is a fasted paced read with action, humor, and a clever cast of characters. This book is terrifically entertaining. Fans of the first book will love the page-turning sequel to Septimus’s Story. When the evil brother Simon comes to the castle from the badlands, he does not intend to do good. He had learned new evils while he was gone. Septimus and his friend must find a way to stop Simon from doing his worst in the castle.

“Physik,” book three in the Septimus Heap Series, is one of the more complex books and involves a glass, the past, and clever humor. Septimus have been transported back in time through a glass to become the apprentice for an alchemist. The process of getting there is nearly as interesting as the mission itself. This book is another fantasy adventure, filled with the characters we’ve come to care for, magical objects, dragons (and dragon poop), and more. With the quirky storyline, the story itself is I would say one of the best books in the series. 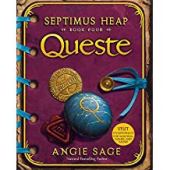 “Queste” book four in the Septimus Heap Series, is one of the most adventurous in the series. The amazing storyline has drama and comedy in just the right proportions. The book is about Septimus and his friends embarking on a Queste, but on their way there, who knows what will happen. The story is consists of 49 chapters, all very intriguing. As Septimus embarks on his Queste, he is also on a quest of his own. The treacherous adventure will take you on the greatest Queste you have ever experienced. The fourth book is truly, THE very best in my opinion.