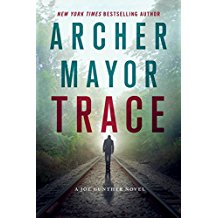 “Trace” by Archer Mayor is part of the Joe Gunther series, but it is not necessary to have read the other books to enjoy this one. “Trace” consists of three separate stories with unusual connections. The three criminal cases vary from one extreme to the other, all three are perplexing, and each has police struggling to solve the cases.

Jayla Charlotte Ann was the mistress of a “scary white man with a short fuse and an inexplicably large income.” In an attempt to escape his abuse, she bought a bus ticket to Burlington, Vermont. Upon stepping off the bus, she was hit by a car!

Dr. Tina Sackman worked in the crime lab in Waterbury, Vermont. While putting together a graduate-level lecture on fingerprints, DNA, and forensic science, she stumbled on a gap in an “ironclad” closed double murder case involving a Vermont Trooper and the motorist he had pulled over.

Abigail Elizabeth Murray was a “precocious, stubborn, and willfully independent” ten-year old who lived in Windsor, Vermont. She liked exploring and especially watching the people who got off the Amtrak trains. “Who were they? What were they up to? What had they seen?” She also looked for treasures on the track, and found something that she was compelled to turn over to Windsor Police – three broken, bloodstained teeth.

Mayor’s skill as a writer is evident as he weaves people in and out of these separate but yet interconnected situations.  He drops little crumbs of each storyline at the start and then adds specifics piece by piece as the book moves along. Those little details matter, and have readers eagerly turning page after page, wondering what happens next, and trying to fit all the pieces together.

Mayor’s authentic descriptions place readers right into the scenes. The village “from the river toward Main Street, high on the bluff, had dark old conduits designed for industrial runoff, abandoned ancient buildings filled with mysterious offerings, acres of concrete slab littered with piled treasure, and a railroad track that marked its boundary. “

The characters are well developed and multi-faceted. We see their triumphs and their faults as they deal with the trials of everyday life. They struggle with childcare, self-doubt, hectic schedules, and relatives in ill health, not to mention pressure of law enforcement jobs.  We come to know them and support them regardless of their human flaws, even as they manipulate evidence for the greater good.

I received a copy of “Trace” from St. Martin’s Press, Archer Mayor, and NetGalley to read and review, and I very much enjoyed reading it. It is a tribute to Mayor’s skill that after twenty seven books, the stories are fresh and captivating; the characters are familiar and innovative; the action is compelling and   intriguing.  This is my first Joe Gunther book, and I enjoyed it so much that now I will have to read the other twenty-seven. Mayor created characters that we want to know, and then he brought the story to those characters. I highly recommend “Trace.”